You are on the right track. Time IS quanticized. As is space. Read my blogs on HU-LU-WU (3-d superstring theory) and Gluons.The basic theory of the universe ought to be simple enough for anyone to understand. Do you think a photon has to refer to a tiny scientific calculator every time it moves? No, it just goes!

Anything essential is invisible to the eyes...

The Fabric of Space 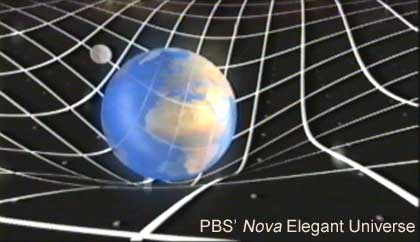 The Fabric of Space

By now, Dr. Zaius, you might be able to understand that the Fabric of Space is actually the dynamic four dimensional membrane that stretches as the hyperspherical shockwave Universe expands at the speed of light. The treads are not neatly spaced and isotropic., they are the maximae of the interference of all dilatons generated by all dilators since the begining of the times.

In fact, it is not a membrane at all. It is the loci representing the solutions to the Quantum Lagrangian Principle requiring each and every dilator to land on a dilaton field maximum at each step of the Universe expansion. For each dilator that will have more than one solution and will be represented by a volume in 3D. Needless to say, this is the Hidden Variable problem that Einstein tried to solve. Everything is based on the simplest equation ever.

This loci is a mesh with a very small spacing (Compton wavelegth of a one atomic mass unit dilator). Basically the size of a nucleus. The radius of curvature of this mess is around 15 billion light years....:)

Well, personally I don't have too much trouble understanding four-dimensional models at least in a sense of analogy. In fact, assuming that your theory holds its waters empirically and mathematically, the idea of expanding hyper spherical wave in five dimensions makes more sense to me than many other theories.

Let's tackle the problem in a rational way. First forget that there is charge and mass and consider the approach I proposed to solve the differences between Gravitation and Electrostatics:

Do you understand the Fundamental Dilator Paradigm???