I found it hilarious that the Universe counted to 36 before exploding..:)

The Hypergeometrical Universe Theory was used to create the map of the Current Universe, that is, the Universe in the corrent epoch.

Never mind the stupidity of discussions about simultaniety... I leave that to people who doesn't understand Time.

Here is the github for you to test my calculations:

Let's start with the Map of the Current Universe:

This map was created using equation 19 from this article:

This equation allows for the calculaton of the position of a Supernova or Galaxy on their epoch hypersphere.  Since it provides the Cosmological angle alpha, and since it is implicit that that region of the hypersphere has its Fabric of Space relaxed, motion will only take place along the radial direction.

Here are the 36 rings

The height corresponds to the density of galaxies. I expected a continuous distribution..something diffuse. What I saw was structured. 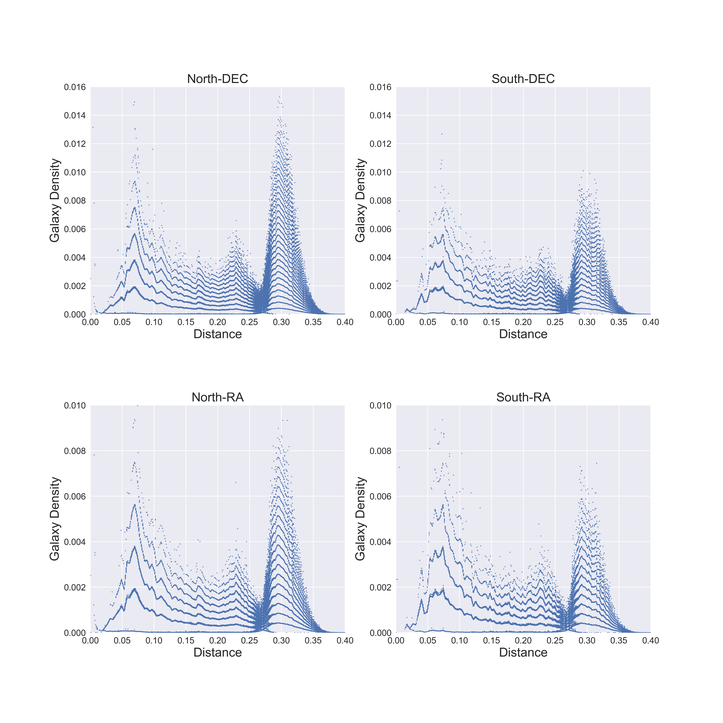 Here are the 36 rings the Universe gave away before the Big Bang…:)

Understand what the figure tells you. The distribution of galaxies follow some obscure clustering profile and that clustering is quantized/structured.

How do we look for Baryonic Acoustic Oscillations in our Myopic 4D Spacetime.

We consider that our visible Universe is a spherical globe (spherical volume). We sought oscillations on modulations along the angular coordinate. We did that because we cannot map the distance coordinate because of Inflation. Also, we started with the presumption that the Universe is Uniform. We cannot say that without a map to prove it. It turned out it isn’t..:)

The Hypergeometrical Universe proposes that the Universe is the hypersurface on a lightspeed expanding hypersphere.

This means that if I know where (which Cosmological Angle and direction) an object is (anytime in the past), I also know where that object is today.  I can only see pi/4 or distance=0.79

Then I picked up the SDSS data in Celestial coordinates, aggregate it by rounding their coordinates (angular and angular to 4 digits).  This means that within the Universe (normalized to 1) there is 10,000 possible bins for stars to fall. The same is valid for 360 degrees declination angle and 180 degrees Right Ascension angle). It is binned but finelly binned. I wanted to preserve the cobweb-like nature of the Universe, where clusters of stars string along in long fillaments.

Once all the 1.3 million galaxies were binned, I created a 3D scatterplot (if you run the script you will be able to do everything I did) and assigned color and dot size to the density coordinate (called Me for lack of imagination).

That is what you saw in the Universe Globe.

Since I have booth Celestial Coordinates and XYZ coordinate for every biin (and their Me density value), I can plot the data along celestial coordinate. I groupedby RA and made a 2D Scatter (alpha versus DEC), where the height is assigned to the cluster density (Me variable).  Here is the result:

As one can clearly see there is a bump around 0.29. There is another close home. The wavelength seems to be around 0.24, that is, it seems that this is an unlucky Universe. That would correspond to the 13th harmonic (Pi/0.24=13).  With any luck it might be the 12th harmonic..:)

What About Oscillation in the Distance Dimension????

That is not correct. That is a proof that the Big Bang radiation passed through a mess of galaxies and that there is a characteristic parameters in the mass distribution and obviously that same parameter will be in the CMB. The galactic mass is creating shadows for the CMB.

That mass distribution is correctly associated with fluctuations on the plasma (Baryonic phase).  So, they got something right.

What they didn't get it right was the acoustic part.

Booth plasma waves and acoustic waves modulated the galactic seeding.  The plasma modulated small wavelength fluctuations that we now see on the sky on an angular fashion.

The acoustics modulated the DISTANCE DIMENSION.  Remember, in a hyperspherical topology, the Cosmological Angle corresponds to the distance d, as shown in the plot below. So acoustics will show up as density variations along distance (NOT ANGLE).

The Fallacy of the 150 Mpc Dark Matter Evidence

I calculated the 2-point correlation shown below:

Each point in this plot of the 2-point correlation is derived from 650 million galactic distances. One can clearly see the component with wavelength equal to 0.24. It looks like Earth is around 0.1 of the center of this wave process. Since observations follow a pattern that oversample close galaxies, it is difficult to know if we are in a peak density or not. Although at this time, there is no information about the dynamics of these oscillations, that can be easily achieved with simple simulation.  Notice that the closest curve has lower statistics due to the scarcity of very close galaxies. One should use the second curve to investigate its spectral composition. Those curves are smooth, which means not high frequency modulation.

Eisenstein etal calculated the same function and arrived at a different result:

Needless to say, our spectrum has a stronger composition of the normal modes of the hypersphere with large peak at around 0.25*13.58 Gly= 3.4 Gly.  Since we are using H_0=72, and 1 Gly=306.391534731 Mpc, sot the resonance is 14.5. So, to some degree, HU SDSS results partially replicated Black etal results.  I decided to use the region further from us, since there is a larger number of galaxies to do averaging. The curves further from us are smoother due to better statistics. This means that this 150 Mpc ( is likely to be an estatistical error.  This component corresponds to n=28, nowhere to be seen in the spectrum below.

Below is the Fourier transform of the higher statistics 2-pair correlation:

(PS - when I wrote this I believed that these oscillations started before the Universe started moving at the speed of light.  Later I realized that the oscillations were driven by Neutronium decay).

There is a question about what is happening during those rings. Well, we first have to emphasize the distinction between what we call NAO and what the current Science calls BAO (Baryonic Acoustic Oscillations).

NAO happens during the Neutronium phase. This phase takes place as the Blackholium phase expands. As the hyperspher eexpands Neutrons starts to be formed out of compressed Fundamental Dilators (FD). If the expansion goes further, Neutrons will decay into Electrons, Protons and Antineutrinos and release energy 0.78254809 MeV/Neutron.

The total energy available to the Big Bang from our hypershell would be converting a Neutron Star 184 light-seconds radius into protons, electrons and antineutrinos, plus 0.

Since we are observing acoustic oscillations along distance d, that proves that the Universe is HYPERSPHERICAL and it is TRAVELING AT THE SPEED OF LIGHT.

The Sequence of Events

The next question is what is the sequence of events. It is my current view that the Big Bang was the 11 or 12 Bang on a sequence of Bangs.

Each Bang corresponds to an oscillation of the Hypersphere that make some regions of the Neutronium into free neutrons.  These Neutrons decay and amplify the oscillation. Thus, I see a crescendo on the second of waves. This means that the Big Bang was really nothing at all.  The energy released per neutron would accelerate them to 4% of the speed of light (tangentially).  This means that the Universe has to had been driven into the speed of light radially by the Big Pop.

I placed the acoustic oscillations in the phase transition between Neutronium and Baryonium. Aside. HU considers that the Universe started as a 184 light-seconds 4D-radius hypersphere. Our Universe is the last layer of the Big Hypersphere. It started as a homogenous humongous metric deformation. From that it decayed into a Black Hole density 4D hypersphere of the same size. It then initiate its expansion. As it expanded, Neutrons could be formed (Neutronium phase). Eventually some of those neutrons decayed into proton, electron and antineutrinos (the first little Bang)…That initiated an oscillatory sloshing within the Neutronium. As the neutronium expanded, the core started to collapse, that is, space stretch and space contraction started annihilating each other. At the end, the core contained a 4D hypersphere containing the same amount of compression as we have in stretch trapped into our Universe. The process nets an extra step of stretch which propelled the Universe at the speed of light. Like a Big Pop.. That motion, together with the slushing Neutron Explosions make up what we call the Big Bang.

PS- In calculating cluster density, I used as a proxy a non-quantized NZ field (number density). That field is composed of floats, as opposed to integers. That minimized the possibility that my results could be the result of a numerical mistake...:)

The results using 1 for each cluster are even more striking...so much, I decided to throw a Monkey wrench on the calculations by using NZ. The python scripts will be made available in my github site

The SDSS data is available at the beginning of this posting..:) so you can play with your Universe.

Little by little people are starting to realize I might be correct..:) I had to show the Universe ringing at the Beginning of Times for them to pay attention..:)