Posted by: M P in Hypergeometrical Universe 12 years, 4 months ago 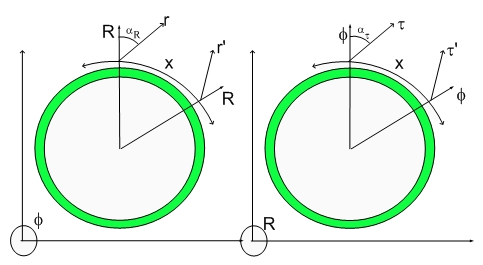 Discussions with Nobody
I continued explaining my theory at the TOEQUEST.com where I had posted some of the initial blogs of my theory.

In my case, our 3D Universe embedding has a simple answer (infinite and empty Cartesian space)…Remember that mine is a homogeneous 5D Spacetime Universe. Matter is just deformed space, thus the embedding question doesn’t even make
sense as it does in an universe full of matter (where mass is a concept different from space)."What would be the cause of the deformations of only certain parts of space, and what would be the reason for the empty cartesian space not being deformed as well?

Since the 3D Universe is a lighspeed traveling shockwave containing all the matter (coherences between deformational states of a 4D spatial metric - or 5D spacetime metric), the rest of the space is not deformed as well...:) otherwise we would be colliding with space deformations (matter) coming from this fourth dimension and that would happen at the speed of light.

The cause of the deformations is the entropic decay of the Initial Deformation. Remember that the model contains initial metric fluctuations of Zero which can return to Zero. If the initial deformation is large enough such that electromagnetic forces and gravitational forces become distinct, then its decay will create the myriad of particles (dilators) and the shockwave expansion.

The details of Cosmogenesis are not as relevant as the implications of the model to particle physics, Cosmology etc. Hence I try to avoid discussion Cosmogenesis.

By the way, this is the only theory where one can make the whole Universe come out of Zero (nothing). The reason is because everything in the Universe is explained in terms of deformations of space. The theory has no mass, charges constructs. It has only metric deformation coherences. The sum of all metric coherences in the Universe reduces the Universe to a flat metric, a pure Cartesian space.

From the Fundamental dilator paradigm you can see that for each space stretching phase there is an equal amplitude space compressing phase. This means that under the correct conditions all matter in the Universe would add up to nothing.

As usual, you can propose anything while extending my model. The only requirement is that it does not collide with what we observe. We don't observe this massive collisions with matter coming from nowhere.

Originally Posted by N0B0DY
"the rest of the space is not deformed as well...:)"

I think I'll buy it, MP, but I don't understand the reason why we would not be colliding.Be back shortly. Thanks for the response.

As in any theory, my Cosmogenesis theory was crafted such as to avoid introducing events which are not present in reality. One does not see (measure) particles, chunck of matter appearing and disappearing in our 3D Universe.

That is what would happen if our 3D shockwave Universe were crossing a region of the 4D space with "deformations" which we call matter.That will hopefully clarify the problem further.If there were other 3 shockwave Universes in this 4D manifold we would be seeing the signs of a collision in our 3D visible universe. We don't see that either.

This supports the idea that there is only one 3D shockwave universe at any given time in this 4D manifold.The rest of the model (dimensional transitions) is created to support that observation.That might be other models equally suitable. I chose this one as the most likely and most profound since it starts with a fluctuation of Zero in a Zero Dimensional Space. One could start with a fluctuation of Zero in a one Dimensional space or two or three or four dimensional spaces...

It is just a matter of taste.

I preferred thinking that the inital metric fluctuation took place at the same time as the dimensions unfolded. Higher dimesnionality means higher entropic barrier to the return to zero.
The decay of an macroscopic metric deformation (100 km or 15 km 4D radius - I don't remember exactly the calculation) into a myriad of very tiny, spinning small deformations in a four-dimensional space creates a tremendous entropic barrier to space relaxation.As I mentioned before.

Please disregard Cosmogenesis until you fully understand the rest of the theory. It is like discussing the sex of angels...

There are more interesting things to chat about.

I wish Lloyd was here to have a look at this because I think he proposed something along similar lines and I couldn't make it work for an infinite model for the same reasons addressed here.I think, as you say, it is the only plausible explanation for the "exterior" universe, but you would have to explain better than he and you have this far the reason for the initial fluctuations and the reason the fluctuations don't continue infinitely.

I'm not saying it's not completely accurate, I do understand what you are proposing, but only accurate in describing spatial mechanics within time. Yet, for me it has to explain why there is the concept of time to begin with, as you imply there is an unfolding of dimensions.

Of course, nobody could ever solve that problem while thinking of things in terms other than space. All current Science, makes use of the concepts of Mass, Charge. One can never solve the puzzle of what contains the Universe in any theory that contains those constructs.
It doesn't make sense to think about exterior and interior if everything is just space. My theory, being the only one that contains a geometrical description for matter is the only one that could solve that puzzle.

I don't know which Lloyd are you talking about...:) I love Lloyd Weber...:) in any event, since you kept your privacy (Nobody), I suspect I will never know who Mr Lloyd is. Please feel free to direct Lloyd to my blog. At this time, I cannot replicate it here in the TOEQUEST.

Thus if I am stating that the virtual particle bath exists, that just means that the initial fluctuation that gave origin to the whole Universe is extremely infrequent, but that doesn't mean anything in the period in between Universes...:) Time is irrelevant in between Universe forming metric fluctuation, since there is NOBODY to measure it...:) No alarm clock, watches or anything that cares for the passage of time...:)

As I mentioned, Cosmogenesis is the theory about how things started. It is much more important to understand the THINGS....:) that is, how the Universe can be described in terms of space. I mentioned that one can choose 0D, 1D, 2D, 3D or 4D as a starting point for the Universe. The basic dynamics doesn't really matter. One just need to know that for a given metric fluctuation, the quantized decay of it yields a tremendous entropic barrier which cannot be reversed until the Universe relaxes again.

I consider that time is always there. Cosmological time always ticks. Metric Fluctuations always happens, irrespective to the dimensionality of the space.

By the way, what we call time is actually Proper Time or the projection of the Cosmological Time. Without a 3D Shockwave Lighspeed Expanding Universe there are nothing to project upon and thus there is no proper time and no time that we can understand or measure.

Not always there is a Universe which we can call home....:)