Every so often I make a summary of what the theory is about. Many people join this site every day and they could benefit from a recap.

Some people might mistake that with some sort of bragging..:) That couldn't be farther from the truth...

This theory is only useful or valid if people take their kid gloves and take their best punches at it...:) What my summary provides is a clear target to welcome criticism or peer review...:)

Science is a contact sport... People are allowed to have their opinions and if they are not well grounded, people should get their asses kicked...:) Politely if possible...:) but a bad argument should never be left standing..:)

Here is an example of myself taking it up in the chin...:)

>How is epsilon0 or mu0 related to the charge of an electron or to the Avogrado's number???? (this is my question after my friend told me that epsilon0 >and mu0 had formulas or definitions) It isn't related to qe and Na(apart from the fact that it is in Js2C-2m-1 units) but you have said you are assuming qe. mu0 = 4pi x10^ -7 exactly. That is what it says on my list of fundamental constants courtesy of P.W.Atkins.. Not even Wikipedia can get pi wrong by 0.8% Or have you discovered a new value of pi in your 4D universe? (Annoying smiley deliberately omitted)

Have you been deleted from Wikipedia as well? Probably for taking the name of the Easter Bunny and Santa Claus in vain. Ockham's Razor to validade Santa Klaus, Eastern Bunny

>By the way, I value your criticism even when it is half-baked...:) One never knows when a good idea would come out of your mind..:) My aim isn't to have a good idea, it is just to get rid of some of your bad ideas.

The criticism is what I expected and hoped for by placing a theory in the internet. If I wanted to keep a low profile, I would never try to make it understandable...:) That is also a sure way to look good in the scientific community.

The simple rebuttal is that 4PIx1e-7 is a definition and not a measured value. This also means that if c is an experimental value, then epsilon0 is also a defined value.

This means that my "error" of 0.8% should be kept within quote marks because I am comparing a theoretical value with definitions.

The other very important point is that formulas in my blog are formulas for Cosmological Constants (epsilon0, mu0 and the Gravitational Constant) and that is a significant hurdle for any theory to overcome. No other theory succeeded in overcoming this little hurdle...as far as I know. Please feel free to provide me with formulas if you have.

This is a very important point and one that cannot be dismissed by simply having someone professing that mu0 = 4pi x10^ -7 exactly... Not matter how much confidence that person might have...:)

He is correct to say that my happy faces are annoying...:) But they serve two purposes. One is to convey a sense of fun... I do Science for fun here in my corner of the Hyperspace...:) If it makes people annoyed and that makes people participate, engage in a scientific discussion, then it is a good thing.... Bring it on, tell you your grievances... scientific grievances, please...:)

With respect to Ockham's Razor validating Eastern Bunny ... If the Egg is made of chocolate and you don't know that some place there is a complex industry manufacturing those things, complex distribution system, etc, etc.. If you also don't know if Bunnies lay Eggs or if you don't know all Bunny species out there.. then the existence of one that lays chocolate Eggs is quite a simple explanation...:)

Magic is always the simplest explanation to anything...

The comment about myself being deleted from Wikipedia was a low blow... After all, my attempt there was just an effort to make the theory more debated...:)

I can't be blamed for that... It is not like I am getting a tremendous amount of resistence to my ideas here..:) nor from my friend...:)

People who knows me, knows that I avoid attention, but I will always behave as if I had the right to have a scientific opinion.

At this exact moment, I consider that Physics is not Free. This is not the Home of The Brave nor The Land of the Free.
Scary things haunt our Physics (click the bird below): 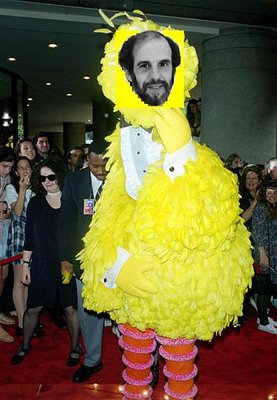 I hope you all will someday behave as if you have the right to have a scientific opinion.
Cheers,

ps- For people who doesn't know how to read Wikipedia (like my friend)..

In SI units, permeability is measured in henries per metre, or newtons per ampere squared. The constant value μ0 is known as the magnetic constant or the permeability of vacuum, and has the exact or defined value μ0 = 4π×10−7 N·A−2. ...:)

By the way, a PI in a Physics constant is clearly a sign of tampering with Nature ... It should be clear that it is a give away..:) Unless you have a fully geometrical theory of Nature, like I do...Then your Cosmological Constant will have a PI in it...:)